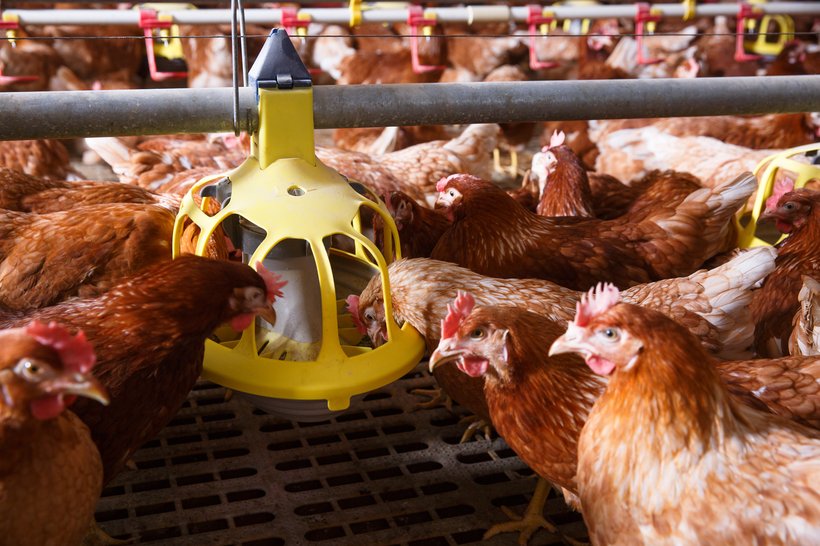 Feed management and feeding techniques will help to provide the right amount of nutrients at the right time. Although we are talking in this article about feed, please do not forget about drinking water management. If birds don’t drink well, they will not eat according to their needs, nor grow or produce according to their genetic potential. Other influencing factors on feed intake are feed structure, health-status, and the environment.

Feed management starts at the time that the chicks or pullets arrive at the poultry house. The feeders and drinkers should be filled and easily accessible to attract the day-old chicks or pullets. To monitor if the feeders

and drinkers are easy to find, you can check the crop filling of the young chicks. After 10 hours, around 80% of the chicks should have a crop filled with both water and feed, after 24 hours this percentage should go up to a minimum of 95%. Especially for day-old chicks it will help to add extra feeders and drinkers in the first week, or to make smaller pens to find the drinkers and feeders more quickly. Don’t forget to provide more floor or cage space as soon as they are growing. Make sure the extra drinkers and feeders are removed gradually, so there is time enough to find the automatic feeding and drinking equipment. As the chicks get older, please do pay attention to the height of the water lines and correct this when needed.

Always make sure that the birds can drink and eat comfortable! In the picture of the wrong example below, you see the birds bend forward to have water intake, but they turn their head to swallow the water. Obviously, this is more time and energy consuming compared with drinking from the right water system height. As mentioned above, drinking water is an important and probably the most important nutrient. In general birds consume 1.5 to 2.0 times as much water as feed. Often a lower ratio is resulting in lower feed intake levels with its consequences on growth and egg production, but also on reproduction. Drinking water should be easily accessible, clean, fresh, tasteless and

If you only check the label of the feed delivered, you might forget about the feed structure. While feed structure can have a massive impact on feed intake as well as on nutrient utilization. For mash diets it is easy

to perform a sieve analysis to check the feed structure from the feed entering the feeding system. For pelleted or crumbled diets this is a bit more difficult, and a wet sieve is recommended to check the feed structure. As a quick test you might dissolve some pellets or crumbles in water and check the coarser particles after the feed is dissolved, as dissolving is also happening in the crop after ingesting the feed. You might wonder, why is feed structure that important? Well, too fine feed (under 0.5mm) can lead to under consumption, as it is more time consuming and more difficult for the birds to consume those dusty-like particles. Besides, chicks, pullets and laying hens do have a gizzard, which is the muscular grinding machine specific in poultry. A muscular organ is only developing if it gets stimulated. Therefore the gizzard should be stimulated by coarse (over 1.0mm) particles. Besides a more stimulated gizzard is resulting in a lower pH level in the gizzard. As protein digestion starts in the gizzard under a low pH, a well developed gizzard with enough stimulation via coarse diets will help protein digestion and consequently your hens have a better feed efficiency.

On the other hand, too coarse diets can have negative consequences as well. This can easily lead to non-uniform feed which results in segregation during transport, within the silo or feeding system or in selective eating by your birds. The risk on selective eating is even higher with non beak trimmed birds. In short, most of the feed should be between 1.0 and 3.2mm with preferably an even smaller range of particle size distribution. You can find our recommendations in the table below.

We encourage the empty feeding technique since many years, as it is important to prevent the accumulation of the smaller feed particles in the feeding system. By applying the empty-feeder technique you are sure that the birds consume their complete diet as a daily ration. Feed uniformity, as mentioned above, and feeder space are also influencing the total daily ration consumed. Often in cage systems there is not enough feeder space to have all the birds consuming feed at the same time. Block feeding, which is basically two feed runs shortly after each other can improve uniformity in case of feeding space competition. With block feeding you will first feed the dominant birds, and as soon as they start drinking and the less dominant birds are able to eat, they will receive a new ration with coarse particles. Otherwise, the more dominant birds often consume the coarser material, which mainly contains energy, while the less dominant birds will receive more protein and the amino acids which are the smaller particles. Consequently, the more dominant birds have a higher risk for fat deposition, while they produce smaller eggs due to the lower amount of protein intake. The same can happen with extreme long feeding chains in alternative housing systems, as this often results in segregation of the feed particles.

If the feed is provided in a uniform way towards the birds, we hit the last factor of uniform and sufficient feed intake: the daily feed intake. Feed intake is affected by a lot of different factors: including climate, health status, breed, feed specifications and feeding techniques. In general feed intake is decreased in areas with a higher temperature or a higher humidity, but it is also decreased if the birds have a lowered health status. With the exception of an increased feed intake with chronic enteritis, as the digestion rate is reduced. To prevent the negative effects of this reduced feed intake, you might increase the feed concentration. In general, unless this is not possible by external factors as climate or health, laying hens eat according to the energy and amino acid levels present in the diet. The last factor includes feeding techniques, we already discussed feed structure and the empty feeding techniques. Additionally, if legislation allows, a midnight feeding can help to stimulate feed intake and egg shell quality. Just provide 1.5 to 2 hours of light in the middle of the night, while the birds do have access to feed and water. As you are feeding the hens during cooler temperatures and as their digestive system will be emptier, the daily feed intake will be increased.

We discussed shortly something about cage versus alternative housing systems. Of course floor and feeder space and the amount of nipples per bird is totally different with each it’s only challenges. However there is also a difference in energy requirement and often in feed intake. As described in the picture below, comparing both the white as well as the brown breeds with cage as a reference (100%) with the other systems. The main influencing factors increasing energy requirement are activity as well as temperature variation. As brown laying hens have higher body weight, they require more energy for activity and daily maintenance compared to white laying hens. In cage housing these differences are not so big, as there is lack of activity, but as soon as you go to cage-free these differences in feed intake become clearly visible, we have tried to visualize this in the chart below. As egg mass production is similar, the amino acid requirement is not changing too much between the systems.

Despite the permanent improvement of layer production results that can be evidenced in different housing conditions and in all regions of the world, thanks to genetic selection and advances in nutrit…

Heat stress affects the nutrient utilization of laying hens via several ways. At first, when the hens are incapable of temperature regulation, they will reduce their feed intake. At second, it is imp…