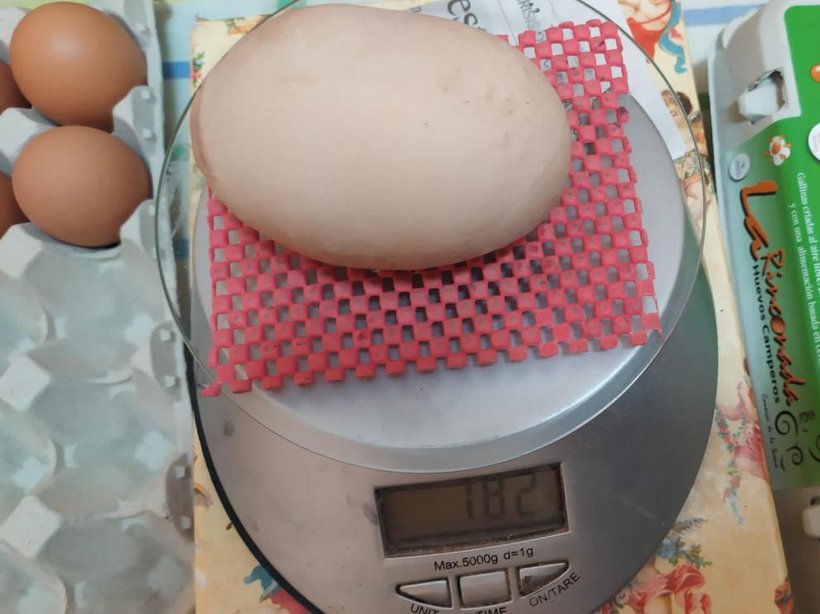 A free-range ISA Brown laying hen from the Spanish region of La Serena has produced an egg of 182 grams. Imagine this is almost three times larger than a regular egg, and most interesting of all, the largest chicken egg ever recorded officially in Spain

The egg producer, Emilio Manuel Pérez was completely surprised when he came across this big chicken egg when he was picking and sorting the eggs of his flock, an activity that he is used to do on a daily bases for already many years. Last Sunday he found the egg on his farm, a free range chicken farm of 2 hectares on the foot of the mountains where he keeps a flock of ISA Brown. It was such a big egg, it almost looked like a potato!

Emilio Manuel Pérez took the egg home and placed the enormous egg on a scale, that indicated that the egg weighed 182 grams! A new record, as the previous largest produced chicken egg in Spain was set at 176 grams (2015, in the town of Moixent). The size of the super egg is 11 cm width, and 19 cm tall (imagine the poor laying hen, from an animal welfare point this big egg size is absolutely not preferred). The weight of this ISA Brown egg is about three times greater than a medium piece (size M) or a small L-caliber, which ranges from 63 to 73 grams. From that point on, everything is XL. It is pretty common to find eggs with two yolks (double yolk eggs) at the beginning of each new flock of laying hens, as the laying hens are so productive. Emilio Manuel Pérez has collected eggs over 100 grams before on several occasions since the start of the free range chicken farm in 2014. Eggs weighing 110 and even 126 grams have been collected at the farm, but never like the one that was found last Sunday.

The role of eggs in sustainable food systems

In 2021, the UN Secretary General will convene a Food Systems Summit to launch ‘bold new actions’ to transform the way the world produces and consumes food, delivering progress on the UN Sustainable …

We crack millions of eggs to make sure yours won’t!

Breeding laying hens is not just about selecting the best birds for improved persistency, higher productivity or better livability. Breeding the perfect egg is essential when it comes to breeding lay…

Profitability of a layer flock will certainly depend on the ability to produce high number of first quality eggs of the most suitable size for each market. Egg producers usually make their decisions …