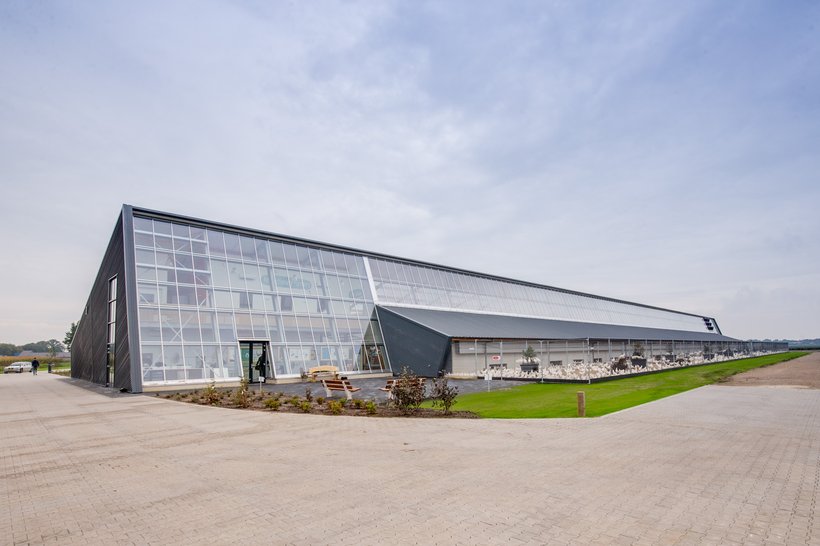 Kipster, the most animal and environmentally friendly chicken farm in the world

Kipster claims to be the most animal and environmentally friendly poultry farm in the world, and it just might be. The concept, which puts hen health and welfare at the heart of the business, distances itself from large-scale commercial production by focusing on improving egg production at the economic, environmental and societal levels. Kipster is an initiative of four entrepreneurs combing expertise in the fields of poultry, sustainability, farming and communication. Four years of development went into the design of the Kipster farm. This project is truly unique as it involved numerous parties including animal welfare and sustainability organizations in the design phase, including the Dutch Society for Prevention of Cruelty to Animals and Wageningen University & Research. The result is a farm concept that is future proof, flexible and scalable.

Farming and food production have a large impact on our planet—especially when animals are involved. Large amounts of agricultural land are claimed for animal feed production and livestock are a significant source of greenhouse gases and other emissions. Furthermore, the industrial approach that is used is often perceived with reduced animal welfare. In response, there are numerous initiatives for alternatives—vegetarian, vegan, organic, and so on. However, the issue is that alternatives that are better for the welfare of the animals are often not better for the environment and vice versa. Or, the alternatives don’t offer the quality that is expected or are substantially more expensive or harder to scale. This usually means that severe compromises must be made.

But now there is the Dutch poultry farm Kipster. They claim to be the most animal, environment and people friendly poultry farm on this planet. Rather than making compromises, the founders of the Kipster farm have created a poultry farm that is not only putting animal welfare first, but also environmental impact as well as creating a profitable and scalable business. Founded in 2017, Kipster opened its second farm in 2019, and more farms are in the pipeline.

In the conventional way of producing eggs, the young male chicks are disposed of by being gassed or macerated. However, Kipster wanted to set a different example where profitability can coincide with animal welfare and environmental protection. Instead of disposing of the unwanted male chicks (roosters), Kipster invested in a modular rearing system where hens and roosters are reared together for a period of 17 weeks. The rearing is carried out according to the specifications of the ‘Beter Leven’ quality mark, which is awarded based on animal welfare and protection. After the growing period, the roosters are slaughtered and their meat is processed and sold as specialty products, like cockerel burgers and cockerel balls. Also, the meat coming from the spent Kipster hens is being processed in specialty products, like chicken sausages, and marketed through Lidl.

The founders of Kipster believe that animals play an important role in feeding the world, but that it must be done more sustainably. They believe that their concept is headed in the right direction by using human food waste for feed, and by operating a carbon-neutral business rather than a business that contributes to world CO2 production. By developing products made from males which are of the laying breed and end-of-lay hens, they address another important aspect of food waste: the unnecessary disposal of potential poultry products within the egg industry.

Kipster made the choice to only keep white laying hens, as white birds are more productive in egg production, show better livability and are more efficient in terms of feed efficiency, and thus they are more sustainable than brown layers. Kipster made a deliberate choice for the Dekalb White breed, because the Dekalb White has been bred on characteristics which fully comply with the vision of Kipster. The Dekalb White is a calm and social bird, and it easily adapts to the alternative diets that are being fed to them.

Instincts and needs of the chicken

We see the chicken as an animal with instincts and needs. Chickens are forest birds. They don't like open plains and certainly not rain. That's why we imitated a natural wooded environment for the chickens, with plenty of variety, daylight, fresh outdoor air inside and plenty of free-range around the farm. The park is fenced off and covered with a net, which considerably reduces the danger from other birds and animals. In the case of bird flu, the consequences are less serious than with other free range systems.

Did you know that over 70% of all agricultural land on the world is used for cattle feed? This has an enormous influence on the ecosystem, biodiversity and nature. Therefore Kipster does not use any agricultural land. We feed our chickens with a new, specially developed feed made from residual flows of, for example, large bakeries. But that is also the reason why we are not organic. Our chicken feed exists for 95% of leftovers and 5% of vitamins and minerals. The CO2 footprint of a kilo Kipster feed is 50% smaller compared with standard chicken feed.

Unique in the Netherlands and surroundings
Where laying hens are born the same number of roosters are born. Annually 40 million one day-old chicks are gassed in The Netherlands. Kipster refuses to participate in this horror. We choose to raise the brothers of our laying hens on an organic farm. With 15 to 17 weeks they go to a slaughterhouse. We make various meat products of the hens, which are exclusively for sale at Lidl.

Organic waste, compost heap, waste paper
When the blue box is not used in the crafts corner, it is welcome into the pile of organic waste, compost or paper. Please note: it is a museum piece. The blue box is on display at the London Museum of Brands Packaging and Advertising. This is the most sustainable egg box there is, made from potato starch, cellulose fiber and water. The CO2 footprint of a the Kipster egg box is 90% smaller compared with a standard egg box.

The farmer receives a fair price from Lidl for the eggs, and the consumer pays Lidl a fair price. No unnecessary kilometres: the eggs are packed on the farm and delivered directly. Super honest and super fresh. Our eggs and meat are for sale at Lidl.

We reduce the fine particle emission to an absolute minimum. We use techniques that are also applied in hospitals and garages. This gives an excellent air quality in the farm that is good for the farmer and our chickens.

Kipster produces, as the first farm of the world, CO2-neutral eggs. By the way, chickens that lay white eggs have a lower carbon footprint of about 5% than the ones that lay brown eggs.

Our solar roof provides energy for about 200 households per Kipster-farm. Something to be proud about! And in addition we do not use fossil fuels.

9. Blending with the landscape

The Kipster farm shows that aesthetics and functionality can have a happy marriage. The modern design of the farm, the planting plan around the farm and all the technical installations and silos that are out of sight.

On the Kipster Farms we have a special room for visitors, an exhibition, and space for education.

The farm is a sustainable alternative to conventional agriculture. The concept can be made suitable for urban agriculture. Thanks to the modular set-up, farms with 3,000 to 120,000 chickens are possible.

Kipster strengthens the position of the Netherlands regarding development and realisation of climate-neutral, sustainable food systems. We show that animal welfare is definitely a realistic option in combination with environmentally friendliness as well as financial feasibility.

The Dekalb White and Kipster

Dekalb White laying hens are an essential part of the new farm concept. With the performance of the Dekalb White it is possible to combine animal welfare and environmentally friendliness in a financially feasible way. The Dekalb White is a perfect fit for innovative farms like Kipster.
The first 24,000 laying hens arrived in September 2017 at the new Kipster farm. These are Dekalb White hens from the Hendrix Genetics breeding company, reared and distributed by Belgian distributor Vepymo. Dekalb White hens are docile in behavior, making them highly suited to this new, innovative system. Furthermore, these hens produce large amounts of eggs with an excellent shell quality. The egg weight is very consistent with minimal increases by the end of the active laying period.

Find out more about Kipster: www.kipster.farm