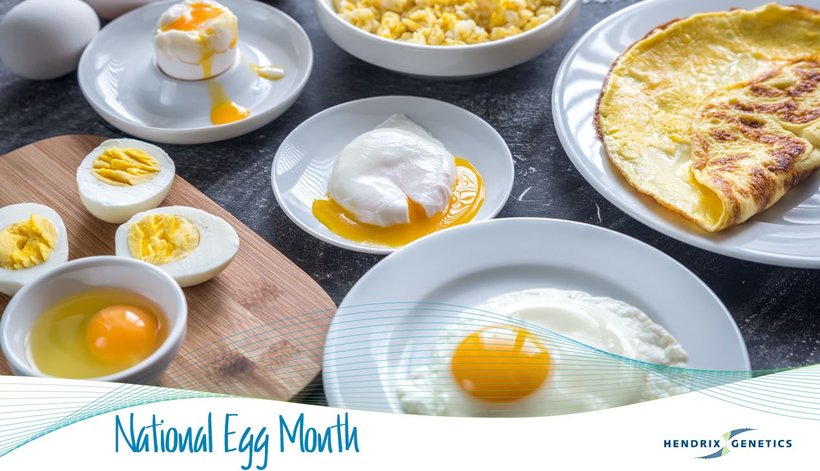 Many of us celebrate the power of the egg every day at breakfast, lunch for dinner or as a snack, so why is the month of May known as National Egg Month? In general, egg sales are the highest during Easter, but as summer is approaching in the Northern hemisphere, egg sales are unstable in many countries. Therefor National Egg Month is celebrated in May to remind people that eggs are not just delicious for Easter, but they are also a nutritious and affordable food that can be enjoyed all year, and especially, all summer long!

Since ancient days people have relied on eggs for protein and other nutrients as part of a healthy diet. If you’re fond of eggs—on their own boiled, poached or fried, or whipped up into a quiche, frittata, or other delicacy—crack a few open and enjoy your favorite egg recipe!

When and why did humans begin consuming eggs?

Humans have been consuming eggs since the dawn of human time. The history is rather complicated and diverse; the culinary applications of eggs are innumerable. Let’s try to find out when, where, and why have people been eating eggs?

When? Since the beginning of human time.
Where? Wherever eggs could be obtained. Different kinds of eggs are eaten in different parts of the world. Chicken eggs are by far the most common eggs to be consumed.
Why? As chicken eggs are relatively easy to obtain, are excellent sources of protein, adaptable to many different types of recipes (from simply boiled, fried, or stuffed to complicated quiche, cakes, mayonnaise, desert, or meringue), and fit perfectly in meatless fasting days required by several cultures and religions.

"It is likely that female game birds were, at some time in the early history of man, perceived as a source both of meat and of eggs. Men discovered that by removing eggs from nests they could induce the female jungle fowl to lay additional eggs and, indeed, to continue to lay eggs throughout an extended laying season." ---The Chicken Book, Page Smith and Charles Daniel [University of Georgia Press:Athens] 1975 (p. 11-12)

"Eggs have been known to, and enjoyed by, humans for many centuries. Jungle fowl were domesticated in India by 3200 B.C.E. Record from China and Egypt show that fowl were domesticated and laying eggs for human consumption around 1400 B.C.E., and there is archaeological evidence for egg consumption dating back to the Neolithic age. The Romans found egg-laying hens in England, Gaul, and among the Germans. The first domesticated fowl reached North America with the second voyage of Columbus in 1493."
---Encyclopedia of Food and Culture, Solomon H. Katz, editor, William Woys Weaver, associate editor [Charles Scribner's Sons : New York] 2003, Volume 1 (p. 558)

Why do we call them eggs?
"The egg...tracks it name back to a prehistoric Indo-European source related to words for 'bird'...The Old English term was oeg, which survived in Middle English as ey (plural eyren)....But in the fourteenth century the related egg was borrowed from Old Norse. For a time the two forms competed with each other (William Caxton, in the prologue to his Book of Eneydos (1490), asked 'What should a man in these day now write, eggs or eyren, certainly it is hard to please every man'), and the Norse form did not finally emerge as the winner until the late sixteenth century." ---An A-Z of Food & Drink, John Ayto [Oxford University Press:Oxrod] 2002 (p. 117)

How many different kind of eggs are there?
Birds and reptiles lay eggs. Of these, some are consumed by humans. Preferences in egg consumption vary according to place, taste and economic conditions.

"Eggs from many species of fowl (birds) have doubtless been consumed since the very beginning of humankind's stay on earth. In historical times, ancient Romans ate peafowl eggs, and the Chinese were fond of pigeon eggs. Ostrich eggs have been eaten since the days of the Phoenicians, whereas quail eggs, as hard-cooked, shelf-stable, packaged products, are now featured on many gourmet’ food counters in Europe, the United States and Japan. Other eggs consumed by various ethnic groups include those from plovers, partridges, gulls, turkeys, pelicans, ducks, and geese. Turtle eggs have been highly prized, and in starvation situations, any eggs, even those of alligators, have been relied upon."
---Cambridge World History of Food, Kenneth F. Kiple and Kriemhild Conee Ornelas [Cambridge University Press:Cambridge] 2000, Volume One (p. 499)

When did people start using eggs in baking and why?
Food historians tell us the practice is ancient but it is hard to venture an exact place, date, or reason. The domestication of fowl (esp. chicken) greatly increased the availability of eggs to ancient peoples. This is thought by some to have begun in south-east Asia in 6,000BC.

Culinary evidence confirms breads and cakes using eggs were made by Ancient Egyptian and Roman peoples. The reason most often sited was the recognition that eggs worked as binding (thickening) agents. How did that begin? The food historians to not venture into this territory. Possibly it was a discovery based on trial and error. Many foods and cooking methods were "invented" this way.

"It is clear that Egyptians enjoyed their food. Nobles and priests were particularly well served, with at least forty different kinds of bread and pastries, some raised, some flat, some round, some conical, some plaited. There were some varieties made with honey, others with milk, still others with eggs."
---Food in History, Reay Tannahill [Three Rivers Press : New York] 1988 (p. 53)

"Farming the prolific chicken has allowed us to make eggs a part of our diet without harming its reproductive cycle. However, the very few ancient Greek recipes to mention eggs date from after the time of Pericles, when the chicken was introduced to Africa. It took some times for the habit of using eggs in cooking to catch on. We do hear of thagomata, made from egg whites, and various stuffing's using egg yolks. On the other hand the classic cake offered as a sacrifice by the Romans, the libum, called for one egg to a pound of flour. In the Roman period pastry cooks made much use of eggs for desserts as well as cakes. Apicius (25 BC) invented baked custard: milk, honey and eggs beaten and cooked in an earthenware dish on gentle heat. Eggs really made their way into the kitchen with Apicius, who mentioned them frequently in the Ars Magirica. Beaten eggs were used as a thickening and to bind sauces and ragouts; hardboiled eggs became an ingredient of various dishes, sometimes with cheese, but here is no evidence that eggs were eaten just as they were, as a dish in themselves. This does not mean that they were not so eaten; it could simply indicate that they were not thought interesting enough for special mention."
---History of Food, Maguelonne Toussaint-Samat, translated by Anthea Bell [Barnes & Noble Books : New York] 1992 (p. 356)

Happy World Egg Day!What a great day to put the egg, versatile on so many aspects, in the spotlight! We hope you will crack an egg, or two or maybe three on this special day. As it are challenging ti…

Vision 365, promoting the global egg industry with an egg a day

The International Egg Commission (IEC) is launching a new global initiative to develop the reputation of the egg on an international scale. Vision 365 is a 10-year plan to accelerate global average e…