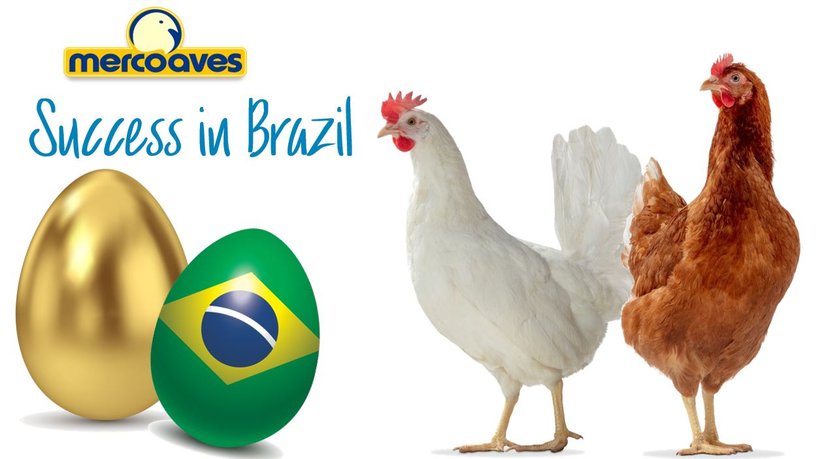 We have received great news from Mercoaves, one of our excellent distributors in Brazil: a flock of Bovans White achieved 509 eggs in a single 100-week life cycle, and a flock of ISA Brown achieved an impressive feed conversion ratio, of just 42 kgs of feed per box of eggs.

Mercoaves has invested heavily during the past years, they have completed two new hatcheries and a new Parent Stock site. It was in the beginning of the 21st century that’s Mercoaves was “hatched”, Mercoaves is the result of a partnership between Henrique Roman and Gauben Peruzzo, which were both former employees of the former Avipal. With their vast experience in the egg industry, excellent contacts, and most of all lot of courage and vigor, they created Mercoaves.

With their ongoing passion, hard work and devotion they have been growing steadily during the past 2 decades. The company grew significantly, not only expanding is facilities, but also its technical staff. At Mercoaves they are continuously focused on improving their efficiency and quality. At Mercoavaes they work with theISA Brown and the Bovans White breeds. In 2021 they have reached 2 exceptional milestones, with plenty of reason to celebrate.

In early 2021, a flock of Bovans White reached the incredible mark of 509 eggs per hen housed, this all within a single 100-week cycle. The record was achieved in an integrated farm of Naturovos, in Rio Grande do Sul, beating the first record of 500 eggs in 100 weeks in Brazil from two years ago, when Granja Pavão, from Goiás, reached the goal proposed internationally by Hendrix Genetics: 500 eggs per bird in 100 weeks.

Later in 2021, a new milestone was reached, this time with the ISA Brown. The Lar Agroindustrial Cooperative reached an average feed conversion rate of 46 kilos of feed consumed per box of eggs for their flocks of ISA Brown. Clearly proven by the excellent and rigorous spreadsheets of the Lar Agroindustrial Cooperative, in Paraná. There were even Isa Brown flocks that reached an even better feed conversion rate: 42 kilos of feed consumed for the production of one box of eggs! "These are flocks that we can consider top in terms of results", says Fernando Venâncio, an experienced technician who coordinates the technical area of Mercoaves' field team throughout Brazil.

Henrique Roman, Gauben Peruzzo and Eduardo Roman (the son of Henrique who recently joined as a partner) are unanimous: these are the results of a lot of work from an excellent team at Mercoaves, the continuous genetic improvement of the breeds by Hendrix Genetics, and most of all the devotion and care of these two excellent egg producers, in carefully following the management guidelines of the different breeds, They have really been able to get the full genetic potential out of their laying hens. Next to these excellent flocks we see in the field many other excellent results obtained with the ISA Brown and the Bovans White. We are clearly in a positive flow in Brazil, and the Hendrix Genetics Breeding program clearly seems to work out very well for egg producers in Brazil. Not only in numbers the birds do well, also in terms of egg quality. The farm Ovos BL won recently for the second time the title of White egg Champion in the Egg Quality Contest of Espírito Santo with their flocks of Bovans White.

The successes in Brazil are not linked to just 1 aspect of running a hatchery, or producing eggs, it’s all multifactorial. When talking to Henrique Roman, the basic philosophy of Mercoaves is honesty, clear communication when dealing with the client, and reducing bureaucracy (keep it simple), to deliver what was promised, and delivering the best product at the farms. “If there are flaws from Mercoaves’ part, it is important to be transparent, solve the issues on the spot, without trying to take advantages".

Eduardo Roman joined the company in 2017, he has a clear goal to further improve the different processes within the company: "We are at the beginning of the implementation, but the goal is to generate total standardization of processes at Mercoaves. Herewith we can reduce errors, decreasing our costs, and most of all to generate more and more quality for our valued clients. It is not easy, nor fast, but it is a matter of focus, time, and commitment"

Gauben Peruzzo is also keen to emphasize the simplicity in dealing with the client and his team, but he points out: the technical structure of the company does not stop professionalizing. "We focus on decentralization, both in the production of breeding stock and hatcheries. The intention is to be closer to the customers to seek even more sanitary security for the poultry flocks. During the past 2 decades we gained knowledge and reliability by being in the field, close to our customers. We cherish the philosophy of simplicity and dedicated service. The only reason why we, as Mercoaves can exist, is our clients."

The current operational structure of Mercoaves is set up in three states, with 23 poultry farms in Rio Grande do Sul, six in São Paulo and three hatcheries distributed in Santa Catarina, São Paulo and Espírito Santo. Next to this there two feed mills, one in São Paulo and another at the headquarters in Bom Princípio (RS). The administrative service office is located in the capital Porto Alegre.

This article is inspired on the interview with Mercoaves published in A Hora do Ovo edition 106, November 2021 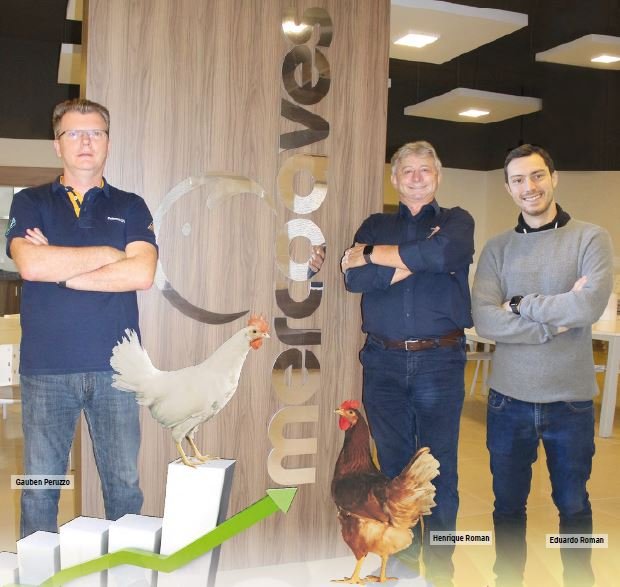 It all started from the initiative of João Carlos Müller, general director of Naturovos. He felt stimulated to achieve egg productivity records when he read the July 2018 A Hora do Ovo magazine, in which was mentioned that the Pavão Farm, from Goiás, had been the first to reach the goal launched by Hendrix Genetics in Brazil: to have a bird produce in a single production cycle - that is, without forced moulting - 500 eggs in 100 weeks of productive life. João Carlos Müller talked to the technical staff and asked, 'Can we manage to reach these numbers?"

YES we can! That was the answer from Naturovos' technical staff, who investigated the challenge and took it to several of their most dedicated integrated egg producers. And Yes, they could! Already in February 2021 they reported that two of the company's integrated producers not only reached the mark of the Goias farm, but even surpassed it.

On the integrated Alex Gotardo's farm the index reached 509 eggs and on the young Natanael Royer's, 502 eggs. On both farms the breed that once again broke the productivity record and reached the goal proposed by Hendrix Genetics was the Bovans White, a hen known for its excellent robustness and high productivity. Listening to the Alex Gotardo, the "champion", his words were, "Bovans White produces a lot of eggs, and if you put a lot of care into the management, they can produce even more!”

According to João Carlos Müller: “Perhaps by pursuing the goal of reaching 500 eggs per hen housed we can achieve even better results compared to before. It shows that the Bovans White has great genetic potential, and we can improve from our part to get the full genetic potential out of our laying hens”. 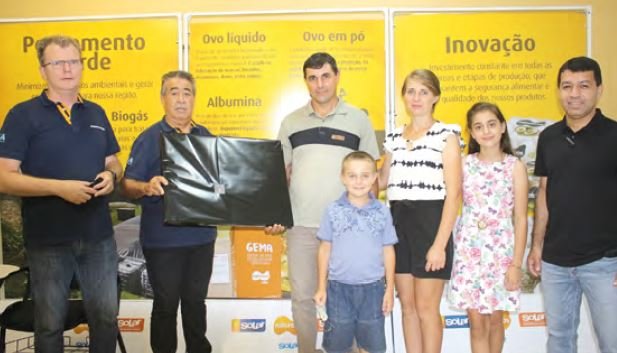 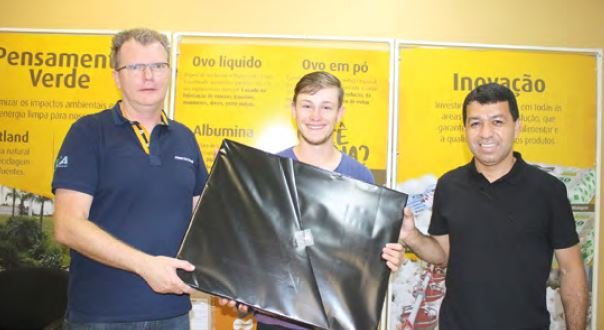 Alex Gotardo Walter and his wife Analice Wolfart (pictured above), and Natanael Royer (pictured below): the integrated farms that reached, respectively, the record of 509 and 502 eggs from Bovans White birds in a single cycle of 100 weeks. The director of Mercoaves Gauben Perruzzo and Flávio Renato Silva, veterinarian and RT of Naturovos, presenting a commemorative gift to the poultry farmers. Flavio is one of the main responsible for the success of the project to overcome the mark of producing 500 eggs in 100 weeks with Bovans White in Brazil.

The Lar Agroindustrial Cooperative, the third largest egg producer in Paraná, is very special for Mercoaves. The Bovans White breed reached the productivity mark of 506 eggs per hen housed at the farm belonging to Laelton Schwaab, one of the members of the cooperative.

Claudinei Augusto Pazuch (manager of the commercial laying hens at the Lar Agroindustrial Cooperative), confirms that this number was surprising even for him. “we were already used to the high productivity of the Hendrix Genetics breeds. We have already seen 498, 499, 500, 501 eggs, but 506 eggs really surprised us, as it's the first time we've achieved this performance!" Pazuch has been with the cooperative for 18 years. He knows the Hendrix genetics product, distributed by Mercoaves, well, especially the ISA Brown, as many of the brown birds at the cooperative are ISA Browns. According to Pazuch, "in terms of chick quality, Mercoaves is among the best hatcheries in the country", and Lar Agroindustrial Cooperative highly appreciates the partnership with the hatchery, not only for the quality of the chicks, but also for the punctuality of the delivery and efficient technical support. "They understand the field, they are very reliable", he praises. He regrets that he won't have a flock of ISA Brown to celebrate at this moment, all because of the pandemic: "We had a flock that pointed to reach 508 eggs/hen housed. But, due to the very high cost of feed during the pandemic period, we had to discard it at early age. We closed this ISA Brown flock at 92-week of age, and it already had an excellent result of 458 eggs/hen housed". 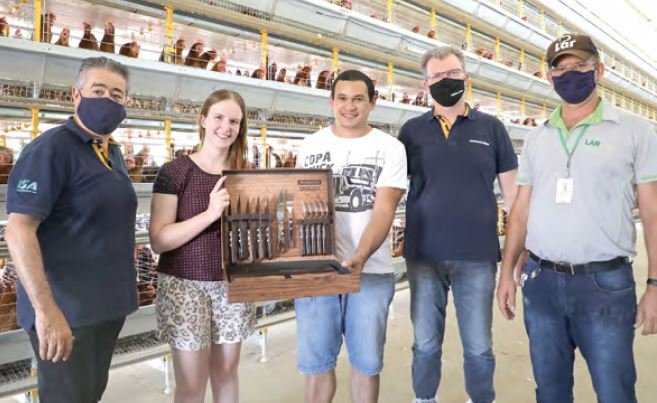 Gauben Peruzzo, Mercoaves director, handed over the award to Laelton Schwaab and Allineia de Santa (Lar Agroindustrial Cooperative), for the excellent productivity achieved with their flock of Bovans White: 506 eggs per bird/housed in 100 weeks. Also in the photo, Dante Tortora, Mercoaves representative (at the left), and Claudinei Pazuch, from Lar (at the right).