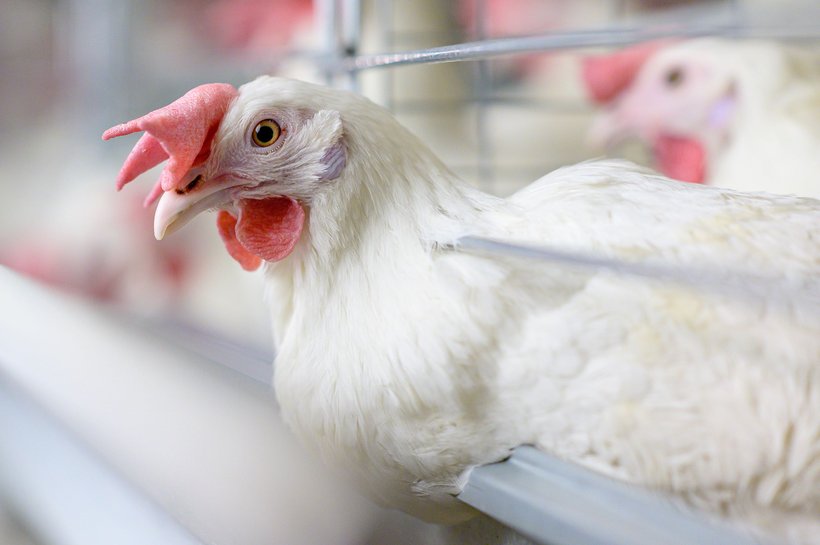 The pullets for the first tests were grown in litter pens (dirt floors), with birds having their beaks intact. During the first decades, dirt floors were replaced by concrete floors covered with wood shavings, slats were added and the available floor space per bird housed got reduced. The possibility to rear birds in cages was introduced at the 12th test as the industry transitioned from floor to cage rearing. Lighting programs were also introduced by that time as the rearing facilities were provided with curtains at the sides, allowing to steer the natural daylight better. Diets changed to better reflect the commercially available diets, and documentation of the diets and their specifications improved significantly. To encourage the growth of the pullets, empty feeder techniques were introduced at the 18th test. by the 20th tests, rearing was done solely in cage housing. The rearing period went down with 1 week to 19 weeks by the 23rd test, down to 18 weeks by the 28th test, and further down to 16 weeks from the 29th test onwards. From the 24th test onwards, next to testing the genetic strains with each other, alternative housing systems were added to the testing. With the 33rd tests, the curtain sided rearing houses were replaced by single light-controlled houses, allowing for much better light control. In addition, the step-down, followed by step-up lighting program in the rearing phase became the standard so that the pullets reached 15 hr of light just prior to their transfer to the laying house and before 1% of egg production.

For the 37th NCLP&MT, because of the increasing interest in organic farming and cage free rearing systems, a floor/range rearing scenario was conducted on a trial basis. This program continued for the tests that followed.

Like in rearing, laying hens were housed on dirt litter floors for the first 7 tests. Prior to the 8th test being housed, concrete flooring was added. Layer densities changed drastically over time: starting with 3.5 sq. ft per bird in 1958 to 0.48 ft² (0.045m²) for white birds and 0.55 ft² (0.052 m²) for brown birds in the 40th test. Molting programs were first introduced during the 26th tests and continued through the 40th test. Fast molting was applied from the 26th through the 33rd tests, a program that was very similar to those applied in the US egg industry in those days. During the last 7 tests, anorexic and non-anorexic molting programs have been included in the tests. Next to molting programs, birds have also been kept for longer testing programs without applying molting, to gain insight in the differences in the persistency of today’s layer breeds available on the market. In the most recent test, the non-molted flocks were kept till 119 weeks of age. From the 26th test onwards, phase feeding was introduced as recommended by the breeding companies. The number of genetic layer breeds (e.g. genetic strains) in the test went down from more than 20 in the first decades, to just 10 in the 15th test, and back up to 18 in the 40th test.

Evolution of the birds

When we look at the evolution in body size at sexual maturity of the birds, we can see a downwards trend for both white and brown egg layers in their bodyweight at the onset of lay. As a result of selection for improved efficiency, the pullets indeed went down in body size in those 60 years. But we must note that the sexual maturity went down as well, as a result of this the measurements were not always taken at the same age. In the 1st 20 tests, the BW was measured at 150 days of age (21.5 weeks), whilst since the 33rd test, it is taken already at 16 weeks of age. Over these first 20 tests, a clear decline in bodyweight, measured at the same age, is seen. We, as a breeding company, are focusing on persistence in egg production and longevity, i.e. focusing on improved robustness. For more than a decade, we are not pushing for bodyweights to go down even further at the onset of lay. It is proven that a well-developed pullet is essential in order to be able to keep your flocks longer in the production of 1st quality eggs. It is crucial that birds have the genetic capacity to develop good body weights at end of rearing, they should be able to develop good feed intake and grow well as a result.

Livability has always been one of the main traits to select for in our breeding programs. Despite its extreme low heritability, steady progress has been made over all these decades via balanced breeding programs. The end of test mortality did not visibly go down, but when you take into account that the length of testing has increased by 228 days in production (from 500 to 728 days), it must be stated that impressive progress has been made via selection. Today’s laying hens show better robustness, allowing to keep them longer in good condition and health.

When plotting data of 60 years of testing in graphs, it can be clearly seen that Genetic Selection made a big impact on the performance of the birds. The per hen housed egg production got more than doubled in just 60 years! It is the result of earlier sexual maturity, reaching higher peaks in production and the most important one: improved persistency, i.e. the ability to keep the birds longer and longer whilst maintaining good health and high levels of egg production.

Sexual maturity, i.e. the moment when a laying hen starts to produce her first egg got reduced by more than one month. In 60 years, layers have been selected to start producing eggs earlier. It can be clearly seen that selection for even earlier egg-production does not take place any more despite the high variation and heritabilities that are still present in the current populations. This trait has been kept rather stable during the last decade as it is so important to allow the pullets to develop well in order to maintain their persistency later during their productive life.

As a result of selecting for improved persistency whilst maintaining egg quality, it has been possible to keep hens longer and longer (i.e. you were still making money). It was already during the mid-eighties that they increased the production cycle with more than 200 days! It must be noted that in the majority of the tests that followed, molting was applied. In the most recent tests, also non-molting all the way up to 728 days have been applied.

The improvements in egg production did not come at an extra expense of increased feed intake. When we look at the feed intake data from the mid-eighties onwards. We can see that the average daily feed intake has remained rather constant. When we look at the ratio between feed consumed (in grams), versus eggs produced (in grams) we can see that a steady decrease is visible since the early nineties of the 20th century. A reduction of more than 25% in feed efficiency was achieved in less than 3 decades, this massive reduction results directly in a lower carbon footprint of the production of eggs, making eggs even more sustainable than ever before.

This overview of 60 years of RST’s at the North Carolina State University clearly highlights the developments of the past 6 decades. It shows that steady genetic progress has been made via breeding and genetic selection, and as the trends towards the end are not flattening, we can expect more genetic progress in the decades ahead of us. It can be observed that the gap between white egg layers and brown egg layers, both in efficiency as productivity, is getting bigger in the further advantage of the white egg layers. Today, as a result of our balanced breeding programs, higher egg mass outputs can be achieved for longer periods but with less input of feed. Therefore, global egg production has become more sustainable, as the ecological footprint has been reduced so drastically.

The authors would like to express a special word of thanks to Dr. Kenneth E. Anderson, from the Poultry Science Department of North Carolina State University, for making all the data of the 40 NCLP&MT freely available to us.

The Dekalb did it once again!

The results of the balanced Breeding program of Hendrix Genetics are clearly showing of in todays’ market. The Dekalb White participated in the 16th Random Sample Test of layer hybrids in cage-free h…

Check out the MIAVIT Podcast: How to realize the genetic potential of egg production: focus on poultry nutrition

During the previous MIAVIT Podcast episode we talked about the genetic potential and the importance of a good quality pullet. Today Estella Leentfaar will tell us more about the production period. Es…

What are the challenges facing the table egg industry in the next decades and what can be done to address them?

Consumers are increasingly aware of the production systems for laying hens and have strong opinions on what is favorable for a hen’s welfare. This has resulted in a move towards non-cage housing sys…